Just a quick painting progress picture update. My converted war drum. I didn't get a chance to use this guy on the weekend since my first game (9th age) went so long. So still after another KoW game yet, but will follow up with my scenario thoughts soon. 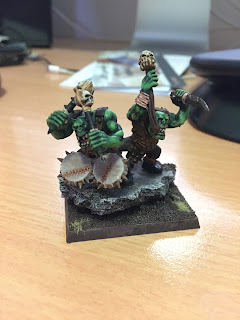 A disclaimer up front. I've played 1 game of Kings of War. As I write this, I'll be playing another this Sunday against some undead, but apart from that my experience is limited.

As you can see by the pics below, I've got bits of boyz everywhere and I'm trying to work out what to build for both Kings of War and 9th age. I'd like to try focus on just the Orcs for 2016 (for both games) and try not stray down the path of temptation/filth of the day.


My goal is to build up a great looking army that will be able to run variety of balanced lists. Specifically, for Kings of War, it seems very important to take into account the 6 scenarios. So here's a first pass at what I think would be the winners and losers from the Orcs list based on the scenarios and use that to guide some selection. I'll take any and all suggestions/corrections in the comments as really, I have no idea what I'm doing :)

I'm going to start with my initial take on the scenarios and what general things would be needed for them and follow up with more posts specific to the Orcs.

By its title, this scenario is all about killing enemy models (and secondly) preventing the death of yours. Winners would seem to be high Me/Att units or High De/Ne units. As anything in KoW, movement would play a large factor in getting off charges, but seems secondary to the 2 above.

Speed seems pretty critical for this scenario as well as the ability to simply survive. So High De/Ne and fast units (Sp)

Defence probably wins this one too. Even the slowest army can make it to the middle of the table, but can they hang around enough to survive to the end. This is where my limited game experience shows. I have no idea how a 6 to 7 turn game would affect the need for fast units or defensive units in this scenario. Is killing the opponent still a better option? Healing and boosting Ne seems important

So there may be 7 different locations we need to 'hold' and we can't do it with individuals. So low cost, high De units? Maybe this advantages troops/regiments over hordes. With things spread out, high Ne units that can operate individually seem pretty useful. Also, the ability to heal. Another factor might be the ability to reach out and destroy units with Ra attacks.

Once again speed seems critical, although once you pick a loot marker up your at speed 5 anyway. Would throwing some hordes in the face of the enemy distract them enough to let a bunch of skulks make off with them? Individuals can't make off with loot, but they can defend. Fast flying individuals to stop their units getting off the board might be of use here too as would High Ra units

Combination of the respective scenarios above. At 2000 points (which seems the standard) an objective is worth as much as taking out a 200 pt unit. Is it better to try take just a subset of the objective markers and make sure you kill every damn thing that is close to them?

So, there's my initial take. Maybe it gives me some ideas. I've no doubt missed a bunch of key points but I'll run through each scenario and take a look at some of the units that might excel in the roles required.

Cheers
Posted by Unknown at 21:44 No comments:

Daemons of Chaos from Castle Assault 2015

So it looks like I never kept this blog up to date. The AoS debacle left me somewhat annoyed at GW. I can't see myself getting into that game unless prices drasctily reduce and the fluff takes a turn for the better.

However, last October I did finish my Daemons for Castle Assault. I played terrible (as usual) but had a great time anyway. Here's a few pics of the army. I got nominated for a painting award but the winner of that smashed all of us on votes. I'll try dig up some pics of his (it was an Empire/Lustria army). Anyway, here's mine 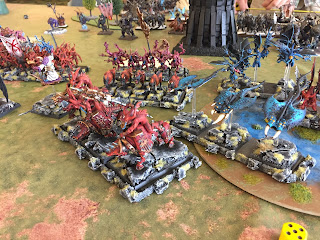 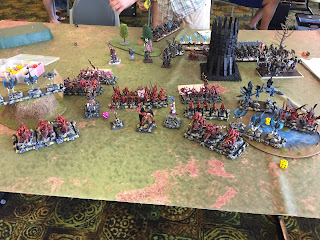 And as you may have guessed by the title of my blog, it's now on to Kings of War and 9th Age for me.

Well.. I'm in no way keeping this blog up to date. To at least attempt that, I decided to throw a few pics up of the past few months slow grow progress.

For this level I brought in more horrors, screamers and flesh hounds (as compared to the 500 point list). I've decided to avoid mono Tzeentch just because I want something that can actually fight down the track. 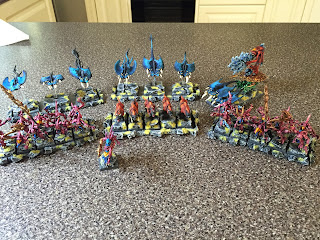 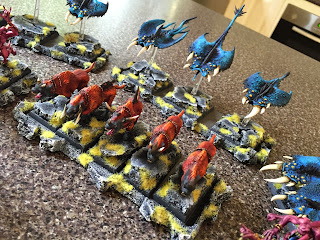 For this level, I added another Herald of Tzeentch. This guy is on a disk and using the law of metal. May help stripping regen off from all those passed warpflame tests. 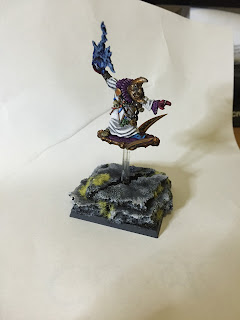 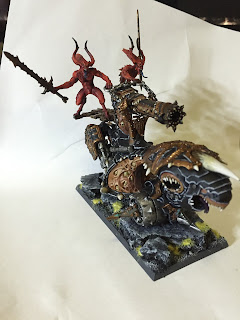 For 1500 points I'm just adding more horrors (5) and a unit of Blood Crushers. I need something that can fight, so that's the idea of the crushers.

However, in my test games, I'm finding that I have to use the 120 point screamers as re-directors and they're just too expensive for that. Next month I'll be bringing in some furies that I'm converting up from horrors using Tyranid Gargoyle wings. 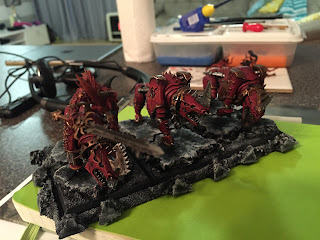 Still WIP, but having fun with the edge highlighting

500 points of slow grow finished plus some odds and ends

I'm bringing some Tzeentch daemons and finished them a good few weeks early to the point that I'm almost finished the 750 March deadline. 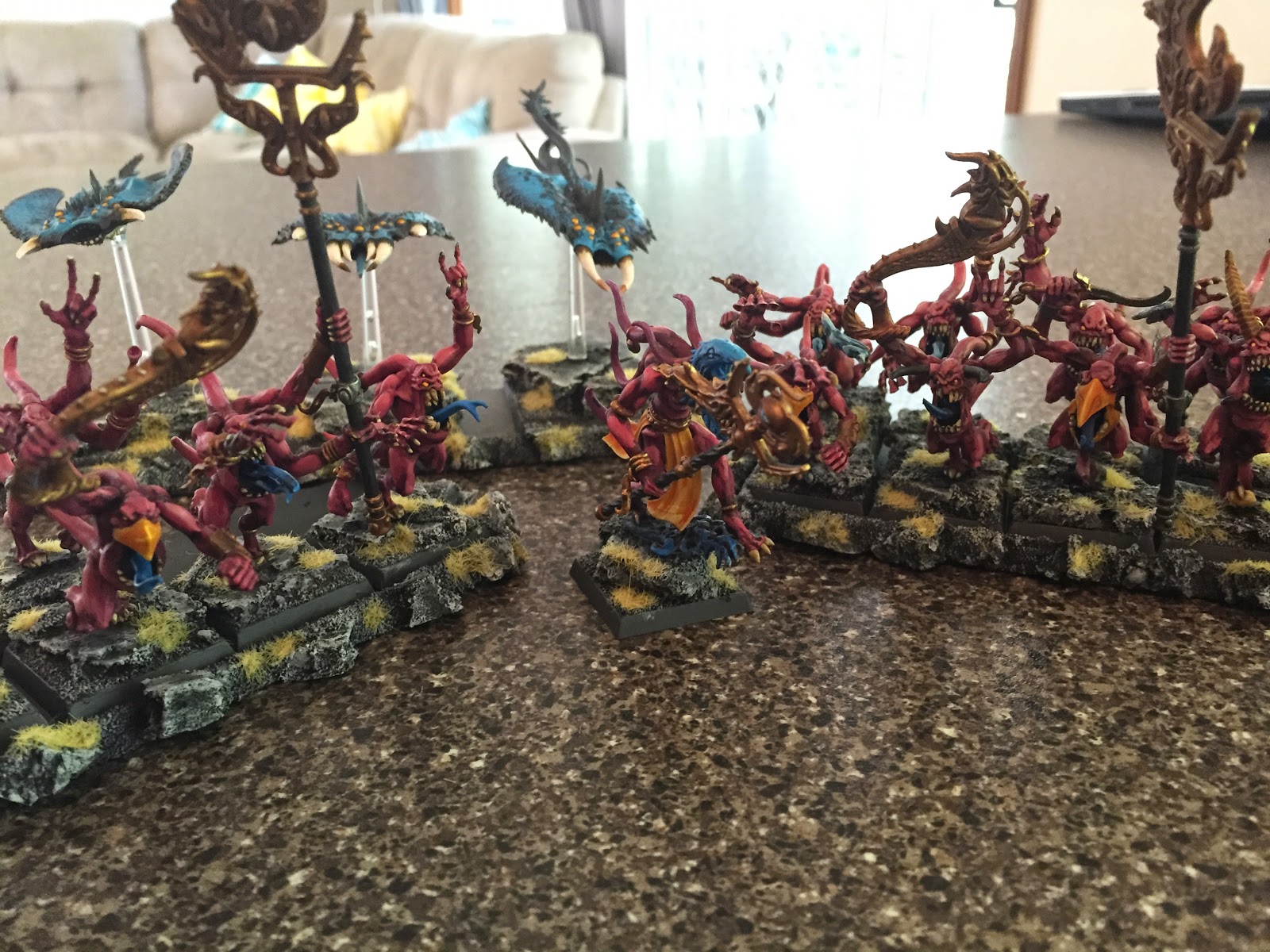 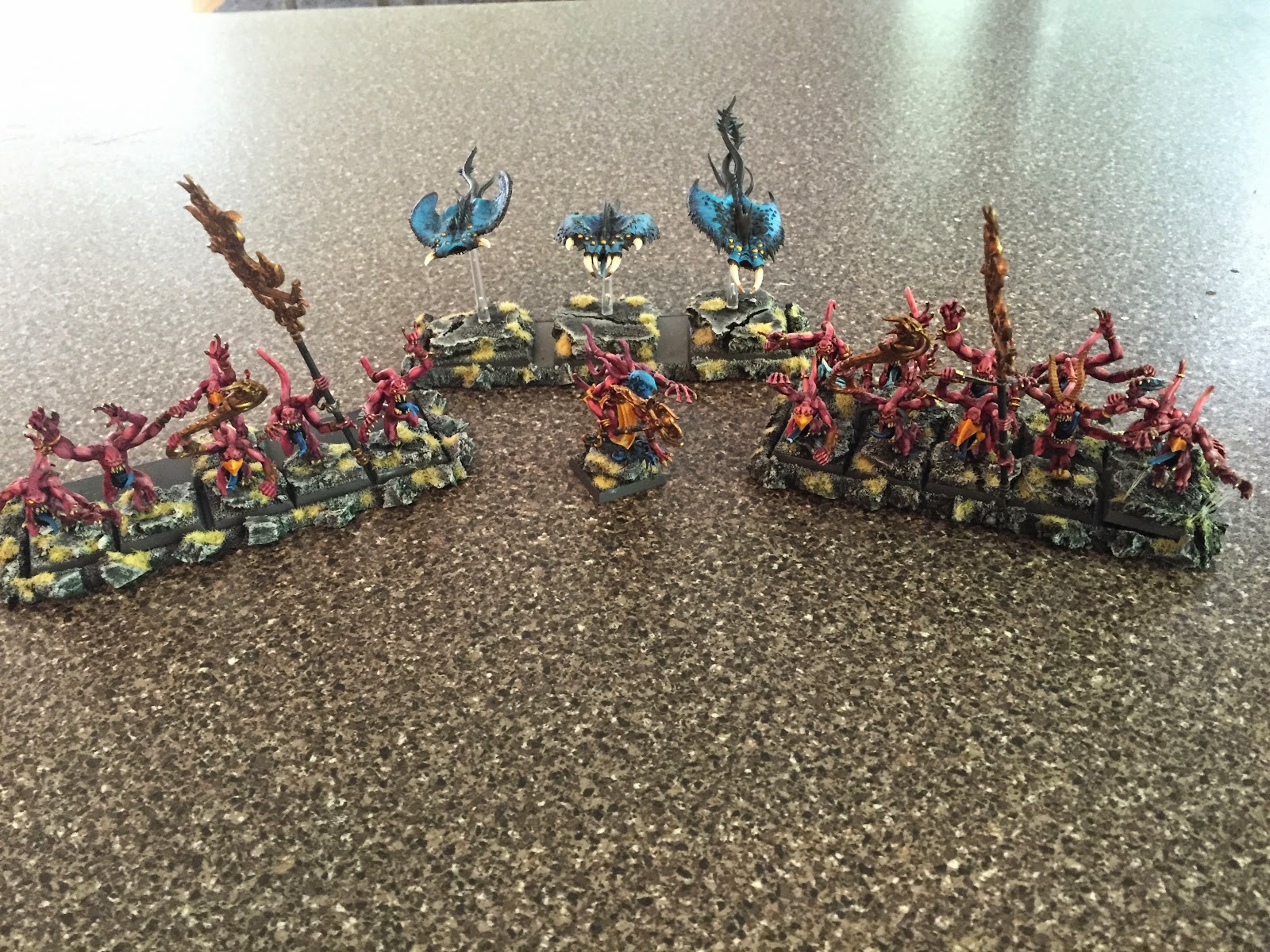 In addition I'm keeping the pulse on the Orcs. I've finished 15 Black Orcs so far and added the big guy, Grimgor!! Can't wait to use his Incarnate version soon.

Wow, have I been inactive on here the past few months. Seems that's the way all my blog attempts go.

I haven't been quiet hobby wise though. Check out my Youtube channel first and foremost, it's always up to date, at least as much as I can make it.

As for what I've got finished this year.

I successfully got my Orcs & Goblins painted, as you can see my past posts for some pics full army pics. I have now started expanding it with the less than optimal choices as I do want this army to continue to grow (It's my first love). At this stage the pieces I'm planning on adding are


I have also helped organise a local slow grow league where we start with 500 points and add 250 each month until November, making a 2500 point list. For this, I've chosen to go Daemons of Chaos. The initial list is Tzeentch themed, however, I'm not adverse to adding Khorne down the track as I think I'll need it in a 2500 list. :(


So hopefully 2015 is going to be a busy hobby year and by the end I should have 3 nicely painted armies. With 9th hopefully dropping, my Empire shouldn't be neglected as it sounds like it'll have some new toys as well.

All ready for Castle Assault #CA14 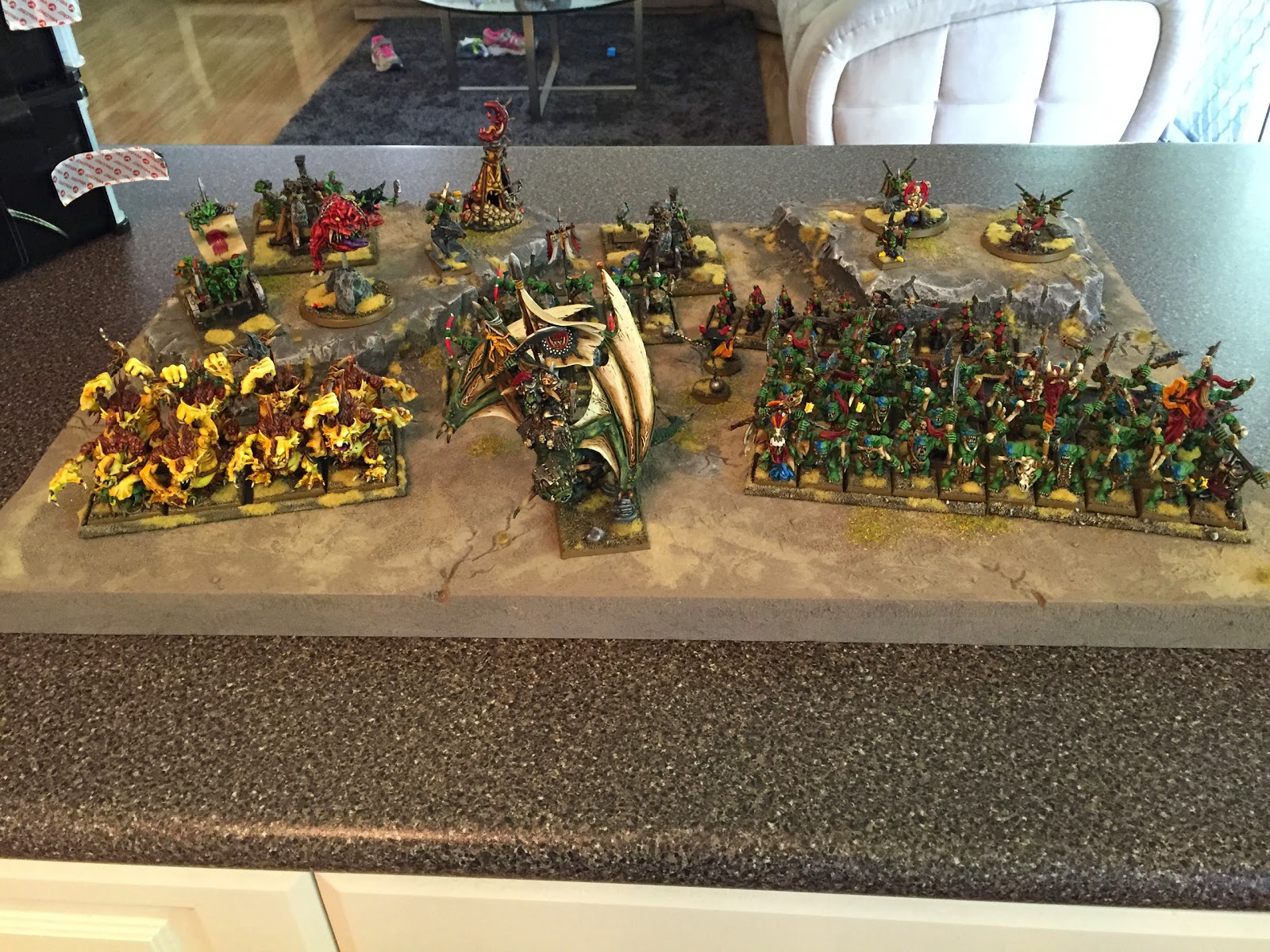